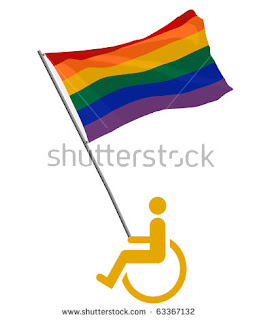 So, we were watching Project Runway All-Stars tonight when Joey made mention of wondering what it's be like being a gay crip.

Watching the rest of the episode, I mulled over her comment.

I mean, I know I’ve said I’ve been open most my life, because I can’t hide being a crip, but, wow, throwing sexual orientation into the mix when growing up physically different than everybody else’s already a bitch.

Joey’s told you about her struggles at home and school.  She’s come a long way since we met.  I dealt with some bullying in school, but not to that extent, I don’t think.  I was more vocal, more brash, and ready to step to anyone, crip or not.

Now, I step out of myself, like I do with all these posts about being an alcoholic or the able-bodied looking at me, at us, while still saying my piece about whatever, and I try to think of the closeted crip.  What a load to carry.  Physical difference, anyone can deal with that, but realizing you like the same sex when you’re already stared at, and maybe talked about behind your back…if they don’t just do it to your face, because they automatically equate wheelchair to stupid…AND, they feel they can get away with it since they can run and you can't.  I’ve had that happen to me…except, I don’t forget.  Some aren’t that strong, and that’s alright.  Throw the gay component in, and, damn, just damn.

But, how does the gay crip cope, how does he/she approach someone to tell those feelings?  I’m honestly curious.  Sound off.


Posted by Joey and Jason from Two Feet Below at 1:37 AM