So, yesterday we had an appointment at the shop for Joey to get her Dezo Penguin touched up, but we had the issue with my chair, so when Clint showed with the loaner and I was up, I had about an hour to get used to the new drive of the chair.  Yes, it was the same model as mine, but it sat different, which makes it drive different.

Anyhoo, we set off the same way we always go: down Tanner, turn right on Mercedes, go down Mercedes and turn right on Eisenhower, go all the way down Eisenhower and vturn left on Cresent, go a bit and turn right on that side street, cross Illinois and go until we get to the bike path, which takes to the dog hotel, where we cut through the parking lot to Blue Collar.  I have a path to anywhere I want to go using the side streets, only crossing the busier streets like Illinois if we have to.

TBro’s waiting for us, and we chat while sets up, and MAYBE ten minutes later we’re done.  We hung out for a bit, and watched Cran start a piece on a kid, which I took the chance to tell him I do a blog, and asked him if I could take a couple pic.  He was cool with it. 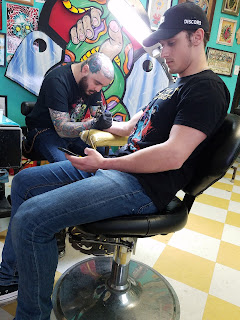 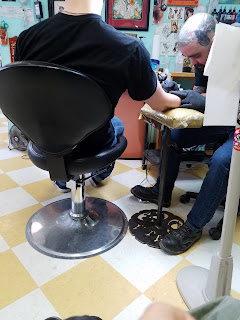 Then, this old guy came in wanting to talk to TBro on the other side of the counter...WHAAAT?.  He said he’d just got out of jail and wanted some ink redone…for free!  TBro said no, but the old guy told him ask Cran, which Cran professionally said he was swamped.  During this exchange, I was trying usher Joey behind me.  Then, the dude left.  We all, except for Cran, who was still inking the kid, watched to see where the old guy went.  We didn’t know if he was coming back.

We talked a bit more, then, Joey told me she was getting hungry, so we said our good-byes, and jetted home.  Man, with the wind, it was c
old.  But, all in all, Joey’s touch ups turned out awesome as always, we didn’t have to take an old man out for starting stuff, and my chair handled well. 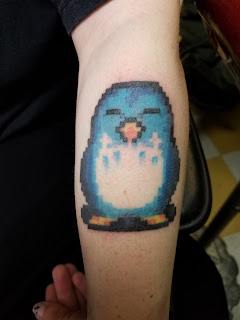 Posted by Joey and Jason from Two Feet Below at 10:38 AM