Hi all.  Joey here.  So, I’m making Jason watch Pokemon (yes, from the 90s).  He never watched it-how uncool is that.  But I think he’s getting into it a little.  I asked him who his favorite is.
“Pikachu, cause he’s a badass.”
LOL.
Yeah, my favorite is also Pikachu.  Pikachu and definitely Psyduck.  Yes, I said Psyduck.
Anyway, we woke up, talking about Pokemon, the other morning, and we find it really interesting-the things we’re noticing.  Like, nobody really has a pet dog in this world.  No (traditional) fish, cats, anything.  You want a pet, you better learn how to be a Pokemon trainer.
So, you all know they each have their own styles and attacks and such, right?  Well, I’ve been known to say, “Hollywood, I choose you!”  Laughing, I then think, what would Hollywood do?  Every morning, he’ll lick Jason’s face…maybe “lick” is the wrong word.  Every morning, he’ll scour Jason’s face, making certain to get his tongue as far up Dad’s nose as possible!  With his face literally in yours, it is impossible to breathe, therefore, Hollywood has “suffocation” attack.
Next, for being a Shih Tzu, HW is a little fat.  If he sits or lies on your arm, it’ll go numb.  “Hollywood, use your “Paralysis” attack.  Also, he can “Hypnotize” you with his cuteness, so you don’t know what’s coming next.
Chewy, on the other hand, has sharper nails, for some reason, than HW, so he definitely has a strong “Claw” attack.  Even though he’s the Biggest sweetheart ever (and lady’s man) he has a loud, deep bark, which scares people.  He talks often, but if someone doesn’t know him, they think he’s angry or about to attack, so he must have “Fear Me”.  Also, when sleeping, he snores-loudly, which might cause “Confusion” or something like that.
Chewy is very curious-he thinks a lot, although, to the untrained eye, it doesn’t appear that he’s aware of anything.  He might just anticipate your move before you make it.  Better hope he’s on your side.


We have such awesome, little Pokemon. 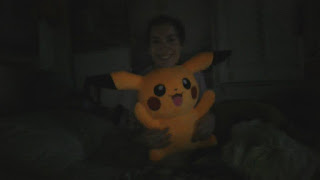 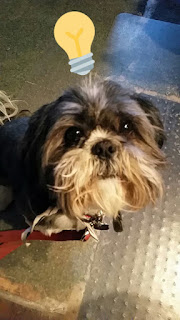 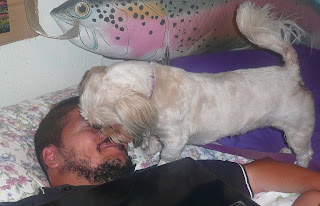 Posted by Joey and Jason from Two Feet Below at 4:57 PM