So, I found this on my FB memories dated 5 years today:

Funny for the day: It makes me laugh to see patients uncomfortable when they have to hand me something at work.

This is true Jason chicanery.

Seriously though, I guess since I’ve always lived with myself, I don’t think of other people when they see a crip hand coming to take whatever from them…it probably feels awkward.  My hands don’t work like others, so when I meet a friend, instead of shake, we fist bump if we don’t just bring it in.  Joey and I both type with one finger.

But then, that post made me think about the peeps with CP in their hands.  Like able-bodied people have a dominant hand that does most of what you do, and your other hand helps unless you’re ambidextrous, you’re just a badass…you guys don’t count…just kidding.

A crip with hand CP has a dominant hand that does most of the work, and our crippy (thanks, Family Guy) hand that’s the helper.  Now, I know said “hands” implying both, but I’ve noticed that we tend to have one less crippy than the other.  In my case, I’m a lefty.  Joey’s a righty.  Given that, the controls to our chairs are accordingly.  We tend to want our drinks and other pertinents on that side too. 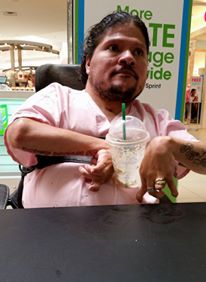 That’s not to say, if something gets put on our crippy side, we’re ass out.  First, we’ll see if we can maneuver, so we can reach whatever with our main hand, or get a reacher to move whatever to the correct side.  If that’s not possible, we can get said thing with our crippy hand…it just takes longer with planning.  The reacher’s also handy for crip Murphy’s Law, which says you’re probably going to know off whatever you’re going for with your crippy hand.