Exercising from Two Feet Below.

So, this is going to be a twofer.

First, the US Father of Taekwondo, Jhoon Rhee, died today.  Without him, there’d be no Bruce Lee; therefore, no Jackie Chan and so on.  Martial arts film wouldn’t exist as we know them. 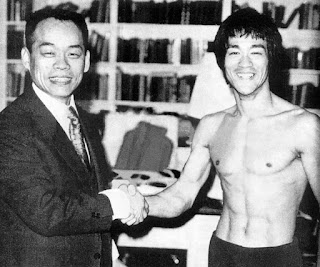 OK, how’s that tie into the next part?

Taekwondo's a great form of exercise, which is a must for a crip with lesser mobility.  With that in mind, today, I started doing weights with Joey.  A couple weeks ago when we took an adventure to Target, Joey got a 2 and 3-pound dumbbell.

I was in the room when she was doing her routine (25 2-pound punches right, 20 left and 30 curls right and a 20-second extended left arm hold) and asked her to leave it on the bed when she was finished while her badass lifted herself on the pot after.

Last year, I was diagnosed as borderline diabetic.  A couple months ago, I went back to check how I was doing.  My A1C was up from 6 to 6.2.  I need to get that shit down, because I DON’T want to be on insulin.  Nobody’s gonna stab me in the gut!

This badass right here goes to Planet Fitness a couple times a week to keep his CP in check among other reasons.  I think he does it to his 6-pack to the chicks…just saying.  He's my older brother from another mother.  I need to keep up with him. 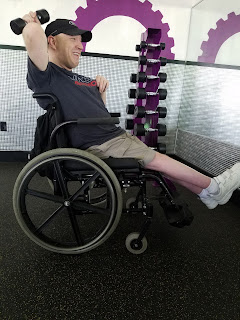 Anyway, I got to get serious if I’m gonna keep needles out of my gut, right?  Besides, I used to do weights when I was on the swim team my senior year, a stunt I fought for a few years before the powers that be acquiesced, on the days I wasn’t in the pool.

I did 50 curls both arms and 50 arm extension lifts, both arms.  I’m feeling the burn, but it feels good.  We’ll see where this goes.

Be good too each other.

Posted by Joey and Jason from Two Feet Below at 7:51 PM