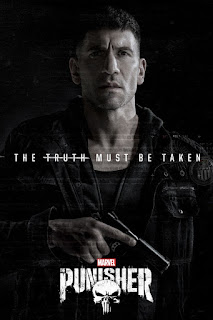 Sorry this’s goin’ up so late.  Today was a hella day.

So, I finally finished Netflix’s first season of The Punisher this weekend.  I liked it.  It kind of lost me getting into it, then, I took time off to get Pokemon educated by Joey.  However, the second season of Jessica Jones was also starting, and with The Defenders, they seemed to be broadening the Marvel Universe to incorporate Daredevil, Luke Cage, Iron Fist, and Jessica Jones since they all live or work inn Hell’s Kitchen.  The end of that season teased Punisher.  I wanted to be up-to-date in case Jessica just happened to show in leu of her impending second season.  Well, obviously, she didn’t make a showing being that it was Punisher’s inaugural season.

OK, on the surface, Punisher’s a straight up revenge character, the whole getting the bad guys that killed his fam angle…that old chestnut.  But, looking deeper, Punisher has some serious social commentary going on.  Not that Marvel doesn’t tackle social issues…after all X-Men have been dealing with prejudices in film for the last dozen years or so.  Punisher steps up to deal with war and the inevitable PTSD that comes with it.

Now, I thought Daredevil was graphic, but it’s child’s play to Punisher for obvious reasons.  With claustrophobic camera angles (you know the ones where the head takes up the whole frame) and equally claustrophobic acting from Jon Bernthal, (from The Walking Dead) we get to see just how unraveled Frank has become as he takes out the guys that want to shut him up for atrocities they perpetrated during tours of duty.  Through flashbacks that meld into present and back again, we see what Frank did and we see him fall back into those old tactics and mentality to get his “mission” accomplished…while eluding the cops himself…because, they frown upon his vigilante leanings and he’s supposed to be dead.
J, why the big build up?
Because, PTSD’s a very real thing.  People off themselves as well as other people when their PTSD’s triggered.  Case in point, the manner of the way Frank takes his adversaries out with increasing brutality to the end…I’m not spoiling it for you if you haven’t seen it yet.  Suffice it say that it’s HARDCORE.
On a personal note, I’ve got friends, who had friends that went through tours of duty after 9-11, came home, but never left the war, couldn’t cope, and aren’t here anymore.  Yeah, I’ve been hardcore against peeps that decide to off themselves for whatever the reason, but I can’t judge…I’ve never been to war, I’ve got NO idea of the shit soldiers bring home.
Just thinking.
All you ladies and gents that’ve served, I bow to you.
Be good to each other.
-J-
Posted by Joey and Jason from Two Feet Below at 9:31 PM