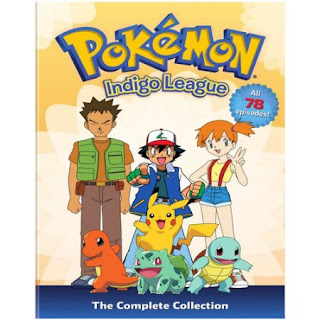 So, Joey told you guys about my Pokémon education.  Now, when we met, I used to rag on Joey about Pokemon being a cult, we Americans thought was just a cute anime.  Pikachu was the leader speaking an ancient dialect of Armageddon proportions.  OK, maybe it wasn’t that bad, but it sounded good.

Well, we finished the first season of Pokemon Indigo League on Netflix the other night.

Another thing I kept asking Joey about was with all the fights that are actually pretty damn violent, how does absolutely NO ONE NOT DIE?  Don’t get me wrong, I’m not jonesing to see some pokemon die for human glory, but seriously!

PS.  Afterward, I started Pokemon: XY, but Joey HATED it even before the opening credits finished, because she said the traditional anime drawing was NOT there.
Posted by Joey and Jason from Two Feet Below at 9:11 AM