So, Vocal's putting on another story contest.  This one's Sci-Fi, which I've never done...until now.  The prompt centered around a robot named Kuri, which we were to give it a history.  Here's my entry. 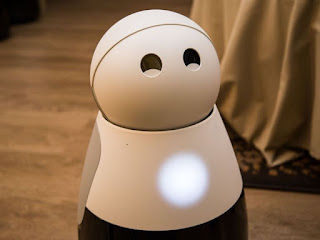 “Keuriii, cme plaay with me,” the voice slurred from the other room.

Kuri silently whirred to life to glide beside Kendall’s wheelchair, saying evenly and fluidly to not startle the child, “What you want to play today, ‘dall?”

Kendall spastically shuffled through her collection of PS34 games until she came to the one she and Kuri were to play.

Kendall and Kuri were best friends.  Kuri was Kendall’s ONLY friend.  You see, Kendall had spastic CP that made her have to use a wheelchair.  It was a fine chair, top of the line with tilt and recline seating and an air cushion system them gently shifted Kendall’s weight as she sat the day away doing whatever.  It was this difference that made it hard for her to go out with other kids her age.  Many of their parents’ cars couldn’t hold her.  She saw them at school, and that was pretty much it.  That’s where Kuri came in.

Kuri was tailor-made for Kendall.  No one knows how the little robot came to be at the Danielleson residence.  Kuri had just always been.  Looking like an old school Weeble Wobble, but with tiny wheels to go by, Kuri had eyes that seemed to glisten like there was more behind them than mere wiring and servos.  Kuri had no visible nose or mouth, but registered scents and taste as well as any human.  Soft-spoken and never jerky or abrupt, Kuri seemed like he/she was created expressly for Kendall’s needs since Kendall’s CP caused her jump at, what seemed, the most inopportune times.  That’s not to say Kuri didn’t have the ability to emote or move quickly when the need arose.  She/He could cut up with Kendall just easily as any kid ever could.  If Kendall lost her balance, which happened at least a couple times a day, Kuri was there before hitting the floor was an issue.

Soon, the wall screen was aglow with figures going to and fro with sound filling the room and spilling throughout the house.  Kendall’s parents never looked up from what they were doing.  They were used to various noise emanating from Kendall’s room.

Kendall and Kuri swayed this way and that like it’d make what they wanted their controls to do do.  As a matter of fact, Kendall’s control was controlled by her brain.  Still, she swayed with her thoughts.

“No ya didn’t,” Kuri replied with a pssshha.  Then, silence as the gaming intensified.

Soon, with the help of Kuri’s virtual reality, the two were in the game dressed and equipped like their characters, Kuri in black and with purple polka dots and Kendall in shades of blue and green, her favorite colors.  Her chair was a metallic cherry red with the ability to be a serious ATV…even moreso than it already could be in real life.

They could hear and talk to others playing the game on their network.  Nobody said anything about Kendall’s vehicle her character was always in.  Who knows, they probably thought it was a new AI tank.  Maybe there was just too much going on.

“This way,” Kuri began, “Be quite this time.  We can’t have you laughing and getting us detected…again.”

Kendall rolled her eyes, “you made me laugh, it was your fault, Robot.”

Kuri sniffed sarcastically and shot back something unintelligible as he/she ribbed the girl about her speech.  Ribbing like this was fair game in the heat of battle.  In all honesty, Kendall loved Kuri more for her/his being normal with Kendall.  The ominous music filled the room, drowning out all ribbing.  They were getting further than they’d been.  This was serious business.

“I wonder what it’s like to be normal.”  There was no stutter or slur.

Kuri’s virtual reality disappeared as Kendall’s brown eyes bore into Kuri’s.  Kuri knew better than to lie.  She knew Kendall was smart enough to see through his/her words.  She knew it was Kendall’s legs that didn’t work, that her brain worked fine.

“Everybody’s different, you know that.  If you were like everybody else, you’d be boring.”  It wasn’t a cop out, it was fact, and Kuri said it with confidence.

“Have I ever lied to you?

Kendall’s cheeks reddened.  She was embarrassed that she was caught doubting.

Even Kuri didn’t have all the answers.

They made their way down the hall to make a snack.  Gaming made them both hungry.  Silently, they glided to the kitchen, Kuri making sure Kendall had a clear path.  In the kitchen, everything was lowered to maximize Kendall’s independence.  Kuri was back up always.

Then, the doorbell rang.

Kendall glided to the door, took a deep breath as she reached for the doorbutton.  She missed the first time, but Kuri didn’t move to get it for her.  Again, the girl took a deep breath and really reached out.  Got it.  The door slid opened, and about five or six high-pitched squeals.  Bobby, Joey, Will, Micah, Noe, and Mikey were all, gathered at the door.

“Come on, the fair’s started, they sang in unison.

Kendall looked at her chair and looked at Kuri sadly.  She opened her mouth to tell her friends she couldn’t when she heard a chorus of energy humming.  She looked to see all her friends with their hover boards they went to school on in their arms.  She looked back at Kuri, who, if Kendall wasn’t mistaken, was raising his/her eyebrows in a “know it all” manner.  He/she nodded his/her head saying, “Go on” in his/her soft voice when she/he saw Kendall pause apprehensively.

The kids moved aside to let Kendall and Kuri take the lead down the hall to the elevator, where they all piled in.  They rode down to the ground floor, the whole time chattering about the latest this and that, who messed up on “the game” with each other ribbing the other.  The kids crouched down to Kendall’s height as they talked.  Kuri was right in the mix, but, at the same time hanging back observing.

Humans, she/he quipped.  In all her/his time, it never ceased to amaze him/her how accepting people truly are when given the chance.  She/he wondered if there was someone out there for her, but that’s a story for another time.
Posted by Joey and Jason from Two Feet Below at 10:18 PM