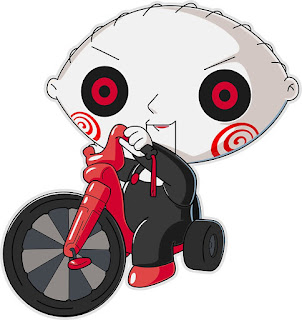 So, have you ever caught yourself hearing something on a TV show or a movie or song or even a book, and you wind up incorporating it into your being…like, for instance, when I quoted Cube yesterday.  It just popped into my head at the end, so I threw it in.  I hadn’t heard that song in a long while, probably, we’re talking years.  My friend, Vanessa brought it up on FB recently, but other than that, nothing.

Anyhoo, Joey and I love Family Guy as you guys’ve read (the crip jokes and gags are relatable and too funny), so certain catchphrases just pop into our heads when we make references.  Of course, Quagmire’s “Giggidy” and Stewie’s “Damn you and such” when I’m at a lost for words when I want to put someone on blast.  I also sometimes blurt out “Blast” when I’m frustrated, but I don’t put the “vile woman” bit with Joey, because I don’t like sleeping on the couch, which I’ve done.

I believe the earliest catchphrase I heard used was Gone with the Wind’s “Frankly, my Dear, I don’t give a damn” and Wizard of Oz’s “Toto, I've a feeling we're not in Kansas anymore.”  Both were released in ’39.  Then, there’s Casablanca’s “Of all the gin joints in all the towns in all the world, she walks into mine,” “We'll always have Paris,” “Play it again, Sam,” “Louis, I think this is the beginning of a beautiful friendship,” and “Here's looking at you, kid.”  If you’re not into classics, you might not’ve heard those.

Then, there’s the contemporary classics like Empire Strikes Back’s “No, I am your father,” Titanic’s “I won’t let go, I’ll never let go,” or E.T.’s “E.T. phone home,” and “I’ll be right here,” which still chokes me up.  Oh yeah, and who can forget Arnie’s and Edward Furlong’s catchphrases in Terminator and T2.  These’re just a few that’ve invaded our consciousness as a society.

One time, in school, I remember when Mrs. Cooper said something about sex in class, so my friend Tasha and I busted out with, “Let’s talk about sex, Baby…” yeah, we got in trouble for that one.  Damn, I’m really dating myself there.  Shut up, J.  Flicks like the Pitch Perfect movies has made incorporating popular song lines into everyday convos cool again.

Ah, where would we be without our media fixes.  We’re such junkies.

PS. I just saw JigStew while searching pics, and had to add him, because he's so dementedly cute!
Posted by Joey and Jason from Two Feet Below at 12:36 PM