We're All Part of the Freak Show. 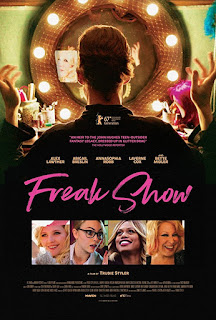 So, in Don’t Underestimate Freaks, I talked about my love for the underdog and people’s perception of the different.  Last night, Joey and I saw the thought provoking Freak Show, IFC Films’ heartwarming tearjerker ’18 offering that joins the likes of the genius The Greatest Showman this season in this renewed era of acceptance whether gender or lack thereof, sexual preference, age, what have you.  Trudie Styler wants the world to know, no matter how “normal” we consider ourselves, we’re all freaks.

Billy Bloom, played by Alex Lawther, beats to his own tune, bending gender roles to the near-snapping point.  Every morning he looks in the mirror to ponder, “What am I going to do with you?”  More often then not, a young 80s-esque Boy George appears from Billy’s room for school.  But, it could be a pasty-faced debutante, complete with flowing white gown and gloves with the fingers painted horny red.  He’s the product of his showgirl, lounge singer mother, Billy calls Muv.  Legendary Bette Midler plays Muv with so much boisterous, alcoholic glee.  Life with Muv is grand.  But, when straight-laced father comes around, not so much.  Eventually, Muv has to go to rehab, and Bill has to move in with “father.”

Larry Pine plays William, Billy’s father, with so much stalwart regal-ness, that a viewer’d have a hard time seeing how Billy came from that nut…as opposed to the milkman.  Anyhoo, Billy’s a total pariah as he sticks out like a…well, you’ve heard the line.  Just being Billy, he’s “marked” to the point of being beat the hell up to being in a 5-day coma.  The ONLY reason he wasn’t killed was because of football player with a heart, Flip, played by Ian Nelson, who jumped in the fray to take out Billy’s assailants and carry him out.  When he finally convalesces so he can go back to school, he finds he’s even more of a mark while a revelation about his perceived past rocks him to his core.  But, in the process, he also finds his resolve.  As the school head cheerleader goes on air with city reporters (Laverne Cox, one of, if not the most popular modern day transgender actresses) to announce her candidacy for homecoming queen, Billy, from the school rafters, steals her thunder by announcing his candidacy for homecoming queen.

I won’t spoil the rest for you.  You’ll have to take the chance to check it out yourself.  Suffice it to say, Freak Show is one you either love or hate depending on which side of the fence you stand with your beliefs…and, perhaps how secure you are in yourself.