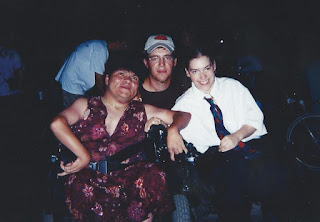 Joey and I went back to camp the next year as a couple. We had no idea if the camp had produced any other crip couple, so we thought it’d be fun to go back as such. From the get-go, we’d been unorthodox. For one, and definitely not the least of our unorthodoxies, was I lived in my own house that my ex had left me with. I chose not to move back in with my folks like you hear so much these days…and they don’t leave! By then, I’d been on my own for five years…first, with my brother, Joey, then, with Teri, my ex. And, I had a fur baby, Lucky, my black lab, Teri and I got from the pound before she decided to up and leave. Anyhoo, that’s water under the bridge, plus, she’s dead, but that’s another blog.
So, Joey and I decided to go back to camp the summer of ’01. I was working at my folks’ office as the front desk, so getting off wasn’t going to be an issue with some heads up and Joey wasn’t working, which is another blog in and of itself. Now, to figure transportation. When I was with Teri, I had my learner’s permit to drive, so I could drive when Teri was with me and I did drive from Midland to Houston, where the in-laws lived, by myself. That was a 900-mile trek. The thing was, Teri never taught me how to parallel park, so I flunked the test. Then, she left. Therefore, I had to rely on rides unless we walked. I hate relying on my folks. I know they’re there for me, but, like I said, I’ve been on my own for a while… I need to be an adult. Nevertheless, they agreed to give us a lift to the camp.
June came, and we were on our way. Six hours later, we pulled in under the wooden Camp Summit sign. Like clockwork, there were counselors to direct traffic, cars, then, wheelchairs (manual and electric), scooters, and walkers, to the different stations for check in. Immediately, I was thrown into the mix, getting ushered through while trying to keep tabs with Joey. It got around pretty quickly that Joey and I were still together. I don’t know if we were the session’s “it” couple, but we were definitely noticed and would be noticed the whole week.
Getting a date for the “end of the session” dance was already taken care of, so the rest of the session was just getting our cabins to coordinate activities together or at least close enough for us to pass by each other on our way to wherever. During meals, we’d trade off sitting at each other’s cabin’s tables. Of course, we had to endure the chatter and ribbing from the other campers and counselors, but we were used to the stares since the public did that at home anyway. We managed… even getting to spend most of campout night together. It was good to be high-functioning crips; counselors tended to consider you more an equal than a charge.
Then, it was dance night. I dressed in my dress (yes, I bought my own dress specifically for this one event) and did my face. One of the female counselors, who had big boobs, lent me one of her bras. On the other side of camp, Joey was dressing in one of my outfits I lent her. Then, it was showtime.
We met up, and sauntered and sashayed our way to the rec room to camera flashes like we were the freaks we really are. You’d think in the camp’s 75-year history, surely some kid thought to push norm boundaries. If so, not for a long while, and not to this extent. Again, it says something for the sheltered crip mentality.
Man, we couldn’t go anywhere without someone wanting to take pictures with us, or wanting to kiss one or both of us, or cop a feel of my boob… it was a trip… and, we were just being ourselves. It was crazy cool, because we killed two birds with one stone returning as a couple, and turning heads and shattering perceptions of crip mentality.
Posted by Joey and Jason from Two Feet Below at 4:51 PM