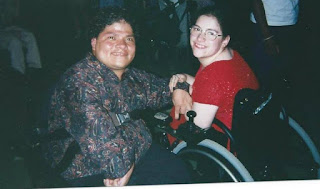 So, I married the first time young. I was just 20. The thing is, she was an able-bodied person, like most of the few people in my world with the exception of a few crips that included my older brother, who died in '00.  I'll get to that later.
Anyhoo, my ex left me for another able-bodied guy exactly two years into our marriage...she told me on my birthday...Happy Birthday to me, right?  Oh, and my friend, Scott, was over that night too.  My brother, Joey, was also in the hospital from a picture perfect shunt, which is a valve that drains the fluid of the brain in some Spina Bifida people, that went south post-op. That was July '99.
Fast forward ten months to June.
I went back to a camp for crips that I'd gone to since '87 with the exception of the two years I was married to Teri. Teri'd left me in late July, and my brother died in Feb, '00. I was broken, but the key to a crip's (anybody's) survival is adapting.
So, life carried on, and I went back to Camp Summit in Dallas. There, we were assigned cabins by our "cripness," I believe. Each cabin had an Indian tribe name. Each day for a week, we did activities like a ropes course, horseback riding, arts & crafts, we had a campout night, swimming, fishing among other things. At the end, there was a dance, which made us either socialize or we were set up, which could be cool...or, royally suck.
I was hanging on the deck during rest period, hanging with counselor friends, minding my own, when this girl came up to me to ask if I was the Jason who writes.  I answered yes, skeptically. She said her name was Joey, which immediately got my attention since my brother's name is Joey.
I'd seen Joey earlier in the week at a talent show we both took part in. She struck me as cool with her long, dark hair down and her band shirt (she's in love with the former frontman of the defunct Stabbing Westward, now lead of The Dreaming). Oh, and she had a tattoo!  I'd never met a born crip (I'll explain the difference in another post) with a tat!
Anyhoo, we talked the rest of rest until we had to go to our next activities.  Before we left, though, we promised each a dance.  We both already had dates. That was Thursday. It was crunch time for those that didn't have dates to get off their asses and find one...or, God forbid...be set up.
Friday, the day of the dance, we did our day thing, then, got ready for the dance, which everybody had some kind of dress stuff to wear for the function. I met up with my friend, who was a walking CP (Cerebral Palsy) girl and who I'd dated the summer before I met Teri, but she was so removed from the camp thing that she was bored. So, I walked her to her car, and went back to the dance to mingle.
Soon, I found Joey, who was alone, and asked her to dance. Our first dance was to "Amazed" by Lonestar...ironic since country isn't either one of our first choices. She was cute. She had on a red dress with a matching red shoe. Wait, what...what the hell happened to her foot?!  It was ace wrapped! Apparently, on the off chance she was actually wearing her seatbelt, she fell into a ditch, and her footrest broke her ankle. Needless to say, she fought through the pain to enjoy the rest of her week. After our first dance, we kept going back to each, winding up the night together.  Then, Saturday came.
The last day of camp's also sad, because we always have so much fun. It's that much more sad when you connect with someone...especially when there's a 600 mile distance. Still, Joey and I hung out and introduced the other to our parental units. And, when we got a chance alone, I asked her to be my girlfriend...distance be damned.
Afterward, she came to my house to stay once before deciding to make the leap to move in with me. We've been together since, marrying in June, Friday the 13th, '03 at the cemetery with my brother and grandma in attendance.
Posted by Joey and Jason from Two Feet Below at 4:45 PM