State of the Union.

So, who watched the State of the Union?

I stomached it for as much as I could.

The first thing I and Joey's provider, Brad, noticed was how smug Trump looked. 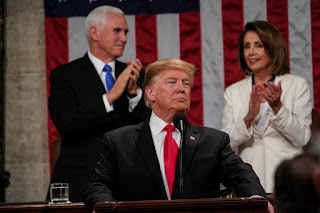 I've said it before, I voted for Trump HOPING he'd be a Reagan, who was an actor before being prez and is considered among the best by some, but, by and large, he's failed.

The next thing I noticed was the "cast" he called on by name, who he PERCEIVES pushes his agenda ...HIS Great Wall.   I read he called on the newly elected women thinking he was giving them props when he was really a joke to them.

On the other note, and still, it WASN'T totally by his doing, he called out Alice Johnson, the inmate, who ACTUALLY Kim K. (I can't believe I'm giving her props for something.) facilitated the release.

The last part I saw was Trump boosting the child cancer research by $500M, but even that seemed exploitative to me when he called out little Grace Eline.  Yeah, her folks were with her, but still it came off as just an opportunistic applause.

Don't get me wrong, if a person's genuinely imprisoned wrongly, I'm all for lobbying for their freedom.  Of course, raising the budget to help research to rid child cancer goes without saying.

I turned it then.

God, I really want the best for people, but when everything someone does smacks of smarminess or self-righteousness, like I'm watching a reality show instead of someone who's responsible for the safety of 325.7M REAL lives, I get pissed, sad, and honestly scared.

Tell me what you guys think.