Hi guys.  It’s Joey again, delivering the second post I commented about earlier.  This will be hard to put into words.  Not that being honest is hard (for me).  It might hurt some feelings, but I think I mentioned before that I Never go out to hurt people.  I put much thought into what I say, even if I’m angry, but if I speak from my heart and soul, and somebody is offended, oh well.
We’re going to Dallas soon.  To visit family and friends, yes, but honestly that is not my main reason for going.  We’re going to a Stabbing Westward concert! 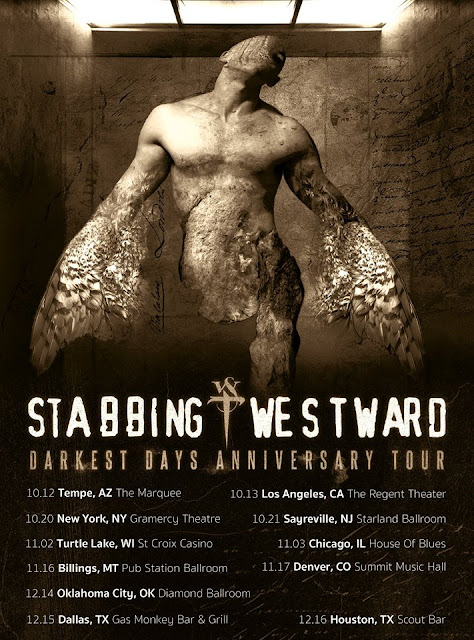 Stabbing Westward.  “But, Joey, they broke up,” you say.  Yes, I believe in 2001.  They formed in the late 80s.  I heard them first in ’96, their second album.  Let me tell you this way, aside from my absolute faves like Def Leppard, Rush, or, I’m sorry, I can’t think at the moment, Stabbing Westward is The One!
I was crushed when they broke up… Okay, yes, I cried.  I saw them in concert three times, met Chris twice.  I was so sad I missed their last tour.  I saw The Dreaming in concert twice-met him twice.  The nicest man I know-except for J-plus he Rocks.  So, I think the end of 2016, they announced SW reunion tours.
WHAT?
I missed one last year.  Crushed.  Now look, none of us are getting any younger.  I told Jason and friends just how important this is that I go. (I know I’m forgetting to say something)  One friend, Ashley, said she’ll go, though she doesn’t know the band.  She’s excited.
It’s very hard, though, to travel with only one person, because that one person tends to both of our needs, so I asked one of my friends, too.  She said yes-she knows the band.  However, through means I will explain in another post, lest we stray too far off topic, she cancelled.  I asked another.  She said yes, too, then cancelled.
Wow friends.
Upset-heart broken-I was, I posted on FB, and J’s mom offered.  Before that (I need to wind this tale) I asked a third friend, Alexis.  Well, Alexis surprised me the other night with her enthusiasm of going with us.  YAY :D
So, here’s the naked truth about it.  I love my family so much.  Though most of them say how much they love and miss me, and they want to see me, the Only times we see each other is when we (J, our cgs, and I) go see them.  We love to travel, and if it was only a matter of Jason and I getting in the car and driving, we’d be everywhere.  However, from a crip standpoint, that’s easier said than done.
My family knows that, obviously.  It’s also happened a few times (sadly) that certain family or friends call me out of the blue.  They’d say, “Hey, Joey, I don’t want you to be mad, but I drove to… (Phoenix, Dallas, some place close) but Midland is just too far.”
WTF, you drove from PA to AZ, or touched the tip of Midland, or what have you, but coming to my house is too far??  Why even tell me you did anything?  But then I’d see pics on FB and know anyway.  Whatever, dudes.
Hey, so, we’re seeing Stabbing Westward soon!
Posted by Joey and Jason from Two Feet Below at 12:34 PM