Following Through with Speechless.

So, last night, we caught up on Speechless that was preempted for a special on former President Bush.  RIP.

It’s the Christmas episode, of course, and, given the season, the Dimeos try to play nice, but quickly devolve into calling out each other on things someone said they’d do for another under false pretenses from past episodes like Ray using J.J. as a cause to get his girlfriend back when he was going to make an all-inclusive playground, or when Dylan made “nice” coupons for Ray for his birthday.  J.J.’s folks were going to make him a mancave for him to get used to doing things on his own while realizing they need to reconnect since the kids’ve been their lives practically since they’ve been married. J.J.’s the only one who has only let himself down as he keeps putting off his list of goals as graduation gets closer, because he’s afraid.  The season compels them to follow through with said promises.

Not taking away from the other subplots, the best dynamic’s between Kenneth and J.J. as Kenneth helps J.J. get through his list, which his first big goal’s to be able to make coffee by himself…a man after my own heart.

Of course, J.J. tries to lift the coffee pot with his reacher, which lifting anything with weight with a reacher is setting up for disaster unless you’re prepared to take the weight and can get it where you need it.  Needless to say, J.J. wasn’t, and the pot shattered. 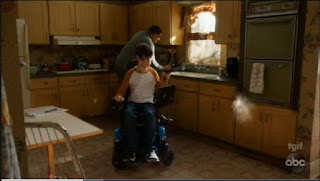 Then, J.J. immediately ran over the shards that went into his wheels, which deflated when he went to get the broom. 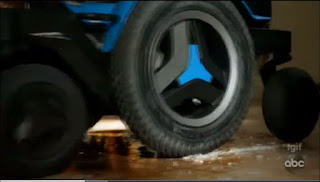 Why he doesn’t have tubeless tires is beyond me!  It just devolved from there, demoralizing J.J.

Come to find out, Kenneth’s just as scared, not knowing what he’s going to do post-J.J.  They wind up giving each other pep talks, and J.J. makes his first cup o’ joe that they immediately spit out. 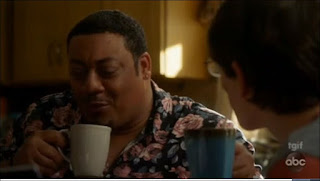 OK, we so related to the whole doing stuff for ourselves bit…including dropping and shattering, say, a dish, which I did this week.  I haven’t had tubes in my wheels since, like, the early 90s, but I’m ALWAYS digging myself in deeper trying to fix the first thing I screwed up.

The point is, I tried.

I’m of the mind, whatever’s screwed up, can be fixed, so take that chance.

That’s what I call growing up.