So, what you guys do when shit gets tough?  Do you freeze, cut and run, or go through?

I’ve done all three at different times, under different circumstances.

I think we’ve all been given an assignment that we come up empty of thoughts, or, say, something happens in life that comes so far out of leftfield we have no idea how to deal, try as we might, wracking our brains to the point we shut down.

OK, confession: if I’m going to cut and run, it’ll be when I see a gun.  It doesn’t have to aimed at me, I’m out.  I’ll run from a gun faster than I’ll from a balloon.  Both make me jump, but guns are just so deafening and sharp, I can’t hang.  It started when we’d have police demonstrations inn school, and, of course, us crips were put in the front row…yeah. 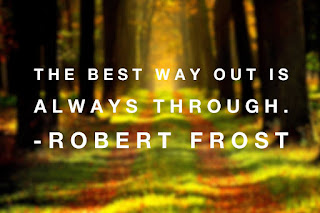 on Cindy’s Twitter feed this morning, and it spoke to me; therefore, I’m sharing.

“The best way out is always through.”  That’s deep, huh?

It’s harder said then done.  Failing’s always on that back burner.  Being judged’s always on a back burner.  For some, this is crippling.  They know they need to step up, they know they should be able to, but just can’t make it happen.  The thing is…it doesn’t go away, it’s there waiting when whoever comes back.

Trust me when I say I’m not preaching.  After I was bitten, it took a bit before I didn’t freak when a stray approached us when we were walking.  That probably ties for 1st place along side riding in the back of Dad’s truck in my chair in the dead of night to escape a wildfire behind our house when we lived out in the country.  The point: I made it through.

Whatever it is, you can get through it.