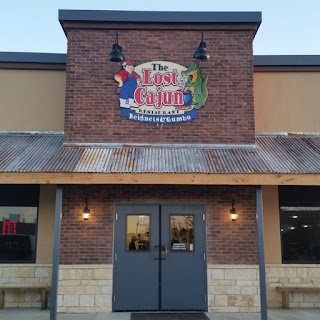 So, this evening, the folks to us to The Lost Cajun for an early birthday dinner since they’ll be on a cruise next few weeks.  We’d heard about the place, but hadn’t had the chance to go yet, so why not.  We love trying new places and we haven’t had a good Cajun place in years since Charla’s took over Marde Gras’ building.  It’s not like we don’t have enough Mexican restaurants here anyway.

I had a fried alligator po boy with cole slaw and a Mexican Coke, which’s just a Coke in a tall ass glass bottle…it was cool for the experience, but a bitch for CP hands that hold with the back of the hands.  It’s heavy and unsteady when drinking.

Joey had the “small” seafood platter that had 3 jumbo shrimp, 3 fried oysters (the ONLY way she’ll eat oysters), and 3 long ass catfish fillets with fries and cole slaw and bread with a bottle of root beer.  She wanted a mixed drink, which they don’t serve, so I promised I’d take her to get.

Mom, Joey, and I had beignets since Mom wanted to see how Lost Cajun’s were compared to New Orleans and Joey and I’d never had them before…not bad, a bit chewier than a doughnut.

The folks gave me a cool card telling me present’ll be in the delivered Wednesday from Amazon.  They’re getting me the movie camera I’d been wanting.  Check it. 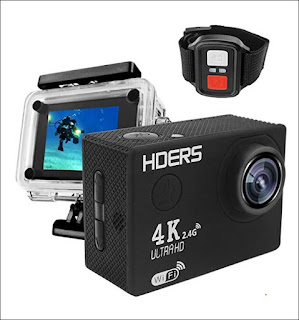 It’ll synch to our laptops and my movie editing program Joey got me.  I need to figure where to attach it to my chair.  One of the pics show it with a clamp, so I wonder if I can clamp it to my control for you guys can ride shotgun.  We’ll see.

Anyways, it was great food with great company.

-J-
PS. My boy, Scott reminded me the difference in Mexican Coke's it's made with cane sugar instead of corn syrup.  Thanks, BG.
Posted by Joey and Jason from Two Feet Below at 9:03 PM