The AT AT: The Badassery of Star Wars.

So, anybody that knows me or read my review of The Last Jedi, knows I’m a geek for Star Wars.  Yeah, I know the factions, Star Wars vs. Star Trek, and I dig both…but Star Wars came first for me.  Joey, my brother, and I wore out our videos, yes, videos of the OT, the original trilogy, a couple times over.  We indoctrinated Kat, our sister, into the fold.  And, don’t play Star Wars Trivial Pursuit with me apparently.  Joey, my wife, says the only person she knows that could keep up with me is her big brother, Tony.  Hmmm, might have to make that match happen.

Anyhoo, the PT, the prequel trilogy gets shit on a lot, and I’ll give you that it’s got its flaws, but I’ll disagree with you that Jar Jar fucked up the whole damn thing like a lot of people want to say.  No, there are a bunch of other kiddie sequences that can momentarily take you out of the movie.  Star Wars has never been known for its perfectly flowing dialogue…and, that NOOOOOOO at the end of Sith…really, George?  Just wrecking the place in pure force power would’ve sufficed.  Then, adding that same NOOOO to the end of Return of the Jedi when silence was needed, Dude!

Christmas for me was a Star Wars Christmas Joey swears wasn’t by design.  She got me some Star Wars pants, and her providers got me Star Wars shirts.  Then, my provider at the time, got us a gift certificate to the movies, so we were able to see The Last Jedi at the ritziest theater in Midland opening week while snacking on pretzel dogs and a HUGE pretzel the size of Joey’s head!  Another cool thing about that theater was Joey and I could sit in the middle instead of the nosebleed, because of our chairs…way cool!

But, the piece de resistance is…drumroll... 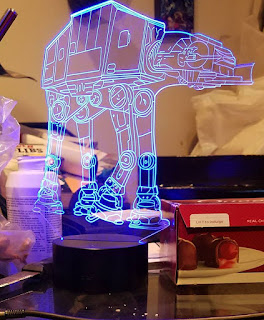 My AT AT lamp!

Only seen in the Hoth battle in TESB, The Empire Strikes Back and a cameo in Return of the Jedi, these badass transport battle vehicles seriously got the shaft.  I LOVE these mothers!  And, God bless Gareth Edwards and Rian Johnson for seeing their badassery and including them in Rogue One and The Last Jedi!
Posted by Joey and Jason from Two Feet Below at 2:47 PM