This entry hasn't been approved after two passes, so I'm gonna nix it.  It'll just be here. 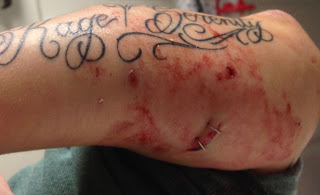 This is the date that never was.

Joey and I were wanting Thai food, so we’d talked about going to The Thai House, a mom and pop restaurant, we’d gone to hundreds of times.  It was just a hop on the bus, a straight shot.  So, went to the restroom while I took the fur babies for a walk and a pee.  No biggie.  I get home to get their beds ready while Joey’s in the livingroom adjusting herself in her chair.  She’s awfully quiet, so I ask if she’s alright and if she still wants to go.  She gives a half-hearted ‘I guess.’

Now, something you have to know about Joey is she has a serious psychic streak in her, but more often than not, she doesn’t voice those feelings.  I really wish she would’ve stressed her feelings that day.

We got the Boys in bed, and left.  We took the exact same route we’ve taken ever since the buses started running: We crosses Midland to continue down Tanner, and from Tanner, we turned left on Leddy.  Leddy turns into a tiny side street that we have to cross Illinois to the stop.  No problem, it’s not even a ten-minute walk.  Not September 13th, 2014.

I was ahead of Joey, thank God, when we cross Harlowe.  We were minding our own, away from the houses, when, Joey says, a pit came from two houses down to latch onto my left arm, which is my driving arm.  I guess I didn’t have time to react, because, instead of fighting and pulling away, I just relaxed.  It hurt like hell and I was looking in its eyes, but I didn’t fight.  In hindsight, I guess that’s why it wasn’t as bad as I’m told it could’ve been.  Another thing is that it T-boned me, I guess thinking it was gonna knock me down…except it didn’t know my chair.  Yeah, it slammed into me, but couldn’t get me down.  That’s when Joey started yelling at it.

She thinks the dog was abused by whoever the male that owned it, because when she screamed at it, it backed off…temporarily.  It ran away ahead of me, turned back around, and latched onto my left leg.  I was really scared then, because I can’t feel my legs and have no movement.  The dog could’ve conceivably torn my leg off, but he didn’t.

By then, a couple guys working in their garage, heard us scream, and came over to help.  One of them had a metal pipe, and started swinging it at the dog to make it run off…but then, it turned on him, tagging him on his back.  By that time, the other guy’d gotten Joey and me to their house.  That’s when Joey realized I was bleeding through my long-sleeve shirt…dripping bleeding.  The cops and the ambulance was called…and, apparently, whoever lived in the house, tipped off someone, because a dude pulled up in a white truck, got the dog inside the house, and sped off.  He never checked on us or anything.

Finally, the cops came, had to figure how to get the dog, and took it away without incident.  The EMTs came to tend to us, which sucked when they pulled my sleeve up.  I didn’t think they could load both me and my chair, so after calling a few people, I got ahold of the guys at the Shop, Pachucos Tattoo Shop.  I figured I could make it back to the house if they could drive us in our van to the ER, which they did.

There, we they already knew what’d happened, where it happened, and by what kind of dog.  Apparently, an 8-year-old kid also was bitten by the dog, and managed to get away.  Poor little dude must’ve been scared.  The guys that saved us drove themselves, and were already seen.

They took me back to examine me with X-rays to make sure nothing was broken, and no teeth were broken off in me.  The tech was extremely caring.  While we waited for the X-rays to be read, I called my friend, Leti, to tell her what happened.  Now, Leti can’t lie.  But, she used her best one on me to get back when she got there.  Anyhoo, the doc came in next, gave me a shot, and just as quickly stabbed four staples in my arm.  He gave me script for an antibiotic and Tylenol-3, and sent me on my way.

I knew the dog was going to be put down, which I thought the owner should’ve instead, but that’s not how the world works, right?  I healed, but the mental scars lasted longer.  We have tasers now, and we go a different way to that stop even though I know that dog’s no longer there…and, I’m aware of every bark now.