Cruisin' from Two Feet Below.

So, Mom and Dad’ve been increasingly going on cruises throughout the years, and especially since they’ve retired.  Every time, Mom’d come home to tell us how accessible the ships’ve gotten.  Of course, going on trips for crips is more than just accessibility of where we’re going.  We’ve got to coordinate having providers that can go too.  Always schedules…plus, I worked.

Christmas ’15, Mom threw it out to give us a cruise for a New Year’s present, but it turned out that was too close, so Mom went back to the drawing board.  She searched Royal Caribbean more, and came on a cruise on Liberty of the Seas that left out of Galveston June 19th.  Sweet, a late anniversary present since Joey’s and my anniversary’s June 13th.  Now, we just had to get my provider, Ashley, on board, and get Joey’s provider.

Ashley was pretty easy and thought she could do Joey too as Joey and I were thinking about who she could bring.  Then, Mom said she could come with us to help Ashley driving and such.  Mom can’t lift anymore, I saw to that when she slipped a disk lifting me and she tripped on one of our dogs, but she could help us do activities and get plates.

The next few months were crazy trying to get everything that’s needed to go overseas: SS#s, birth certificates, your life history…literally.  That’s how I found out my ex’d died in ’13…WTH!  Later, in a roundabout way, after looking through avenues I’d taught myself to find bill deadbeats on the office, I finally found her brother on FB…AWKWARD!  Anyhoo, I bit the bullet, and asked him.  He told me she died from a chemo/radiation-resistant fast-moving liver cancer…DAMN.  We didn’t end well, but damn.  Quickly, June 19th ’16 came.

We loaded all our gear in the van, and we were off.  The Boys were off playing with their friends at one of my then coworkers and friends, Cindy and Terry.

Nine hours later, we were in Galveston.  Now, to decide if we wanted to grab a bite to eat, or just start the process of getting on the ship.  It was unanimous, we get on the ship.  As we drove up, we could see the ship tower over the buildings…HOLY CRAP, this just got real!  We found a place to drop off our gear and get out while found where to board the van for the week.  It was hotter than hell, so one of the guards ushered us in to wait for Mom. 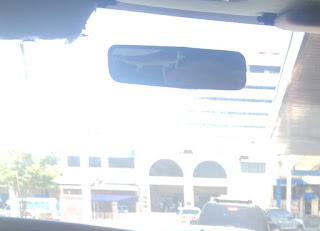 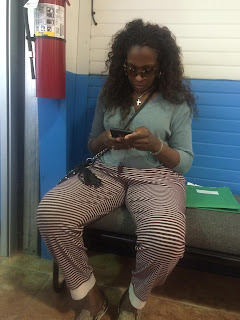 After we got our keys, we were on our way to get on this beast.  As we walked the gangplank, all I could say was, “This is crazy!”  For the next week, we were going to be on a 13-deck vessel mostly surrounded by water!  Our rooms were nice.  There was one initial hiccup…they didn’t have a potty/shower chair…and, ours was 9-hours away.  In our pre-boarding papers, we’d requested one.  Shit…I guess I wasn’t.  They got us a chair before I needed it.

When the requisite how tos were finished by the crew, we watched the ship pull away from Galveston Bay into the open water.  It was weird watching the difference in water as we got away from civilization.  Then, we set off to explore, immediately going to deck 5, the mall.  We went for ice cream, which they gave us for free, even after we pulled out our keys for the cashier to swipe.  Finding a place to sit, we ate our ice cream while we watched other passengers explore.  When we finished, we walked around a little more before going to deck 13, the highest deck we could go.  OMG, it was windy, it really put into perspective how fast we were going.  By that time, it was dinnertime, so we rejoined Mom at go to one of the dining rooms.  The food was to die for.  Joey and I’d vowed not to eat anything we’d heard of in America, so we really tried to stick to that. 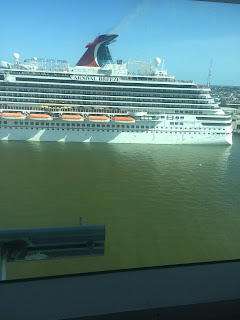 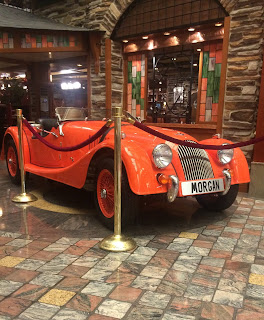 All of Monday and Tuesday, we were on the water sailing for Roatan, Honduras.  To pass the time, we walked the mall and met people, who thought we were cute, and did the various activities put on on different decks at different times like Guess That 80s TV Theme a rendition of Saturday Night Fever.  I crushed on an activities director from Mexico named Luisa.  Don't think Joey didn't have her own crush.  One day, Joey and I shared an expensive White Russian, which actually was damn good.

Roatan Wednesday was an early start.  It was fun going down to the bowels of the ship to get off.  At first, we cruised the tourist dock and the main streets, where we met Tony, a kid working for tips as a tour guide.  He was cool, and didn’t steer us wrong into, say, the ghetto. Then, Mom got us a tour bus, which barely held both our chairs, but we made it work.  Our guide’s name was Jeff, and he answered our questions about the disabled population and such.  He even took us to a literal hole-in-the-wall restaurant, where we ate iguana (think finely shaved barbeque with tiny bones) and Monkey La La, which is alcoholic coffee drink, YUM!  Mom didn’t partake.  We also went to a water park, but weren’t allowed to take pics of the manatees, which was the reason I wanted to go in the first place…bummer.  When it was time to re-board, we met back up with Ashley, who done the zip lines through the jungle.
Another day on the boat, and we woke up in Costa Maya, and Cozumel the next.  Both were fun getting to see the culture, and the food was yummy…especially the cocoa that we saw made the way the Mayans did it in the day.  The downside to Mexico was the shopkeepers were very pushy.  One even rolled her eyes at Joey.  Then, re-boarding took longer, because security checked bags stricter. 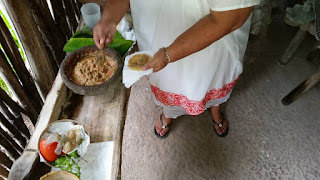 Heading back to Galveston was sad.  Joey and I’d had so much fun on the ship alone.  It seems like anywhere we go, we’re eventually known since, where one is, the other’s not far behind.  We’d made friends it seemed.  One steward even offered to stow us away, so we could stay.  What made it even sadder was the swaying a week or so after the trip. 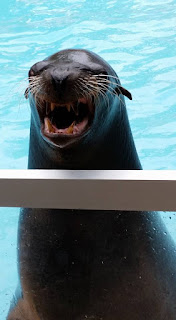