Crip Tattoos from Two Feet Below. 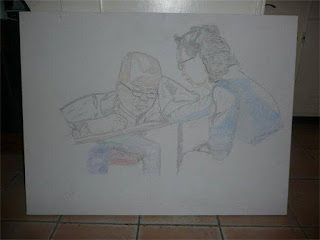 In Beginning Life Again, I talked about how one of the things that drew me to Joey was the cross tattoo on the inside of her right forearm.  She was so shy, I never would have thought she’d go through with something so drastic.  I was wrong by a long shot.  I found out she got it when she turned 18, and her mom, who has a few tats, took her.  She was 21 when we met.  Her ink still looked new.

I was raised in a conservative Catholic family, but I was and still am far from conservative.  Hell, the first time I cussed and got busted, I was with Noe, and uttered ‘shit’ behind Mom’s back.  She turned on her heels, stormed up to me, and grabbed me by my hair and yanked my head back, telling me she never wanted to hear me say that again.  Yeah, that conservative.

Anyhoo, I’d always loved the artwork that went into tattoo, but know if I would ever get one.  After all, I hated getting shots, still don’t…and, getting my blood drawn even worse.  I met Teri, and we had some adventures like we went to our first adult book/DVD store and theater, but nothing as permanent as getting inked.  Then, she left, and I still did crazy shit on my terms within my world, but still no tattoos.  Then, I met Joey, and, though I was still scared of the unknown, I started considering.

’02, we moved from my house on Waverly to Tanner.  While learning our new routes to places, we found our closest tattoo shop, Inked at Ground Zero.  We went into the pretty good-sized shop.  From the outside, it looked like little a hole-in-the-wall.  Crazy Larry owned the shop with his partner, but he quickly disappeared due to snorting away profits, and Larry brought in a revolving door of artists that included Corki, Mongo, and David, who’d go to Holy Grail when Mike would leave Blue Collar to open his own shop.  But, the man had skills, and after a few times of casing the place and Joey giving me an idea of what it’d feel like with a high-powered electric massager, I took the plunge one day after work.  The result was my name cross on my upper right bicep.  It consists of, aptly, my brother’s, Joey, and my best friend’s, Noe, names that died.  The cool thing about this tat was it was my first, and Larry’d never done a name cross memorial.  Of course, this was supposed to be my only tattoo…yeaaah.  My right half sleeve would become my memorial theme arm that has seven tats to date while my left arm became my arm dedicated to my wife, Joey.  That arm has 10-11 tats, including two twins to ones she has…her original cross and a Japanese-style dragon coming out of her skin.

Larry always made us feel welcome, not because we brought business, but because he was a good guy.  Then, the people that owned his lot ran him off, and he opened The Tattoo Shop on Wall St., which meant a longer walk for Joey and I to get inked.  Of course, we persisted to make the trek.  HOWEVER, there was a gnarly front door step, so we had to go through the back, which was sketchy with the broken asphalt of the alley…damn.

There, he recruited Louis the Tattooist, an up and comer at the time, from Uprock and Cal, who’d been around a while in his own right.  The guys were the greatest, not giving a shit about our crispness…especially Cal.  Cal was 6’6”, a smart-ass that took no shit, but he was the most genuine, caring person to his friends.  When we’d come in, he’d yell out, “Who let the freakin’ crips in?”  And, after he’d given a piece, he’d say we were trashy or trashier now.  He had no qualms about ribbing us, especially me, about anything from one of my tats he said looked like a clit to my cripness.  Even with all his experience, we learned he’d never inked a born crip.  As a matter of fact, we learned that many artists got their born crip cherry popped by us.

But, all good things must come to an end, and Larry and his wife, Crystal, wanted to move to Galveston, so they sold the shop, and Lu and Cal opened Blue Collar on Texas, which was even farther, but easier to get to, ironically.  They’d thought about us, so there was a ramp in front.

It was here this bad boy was thought up. 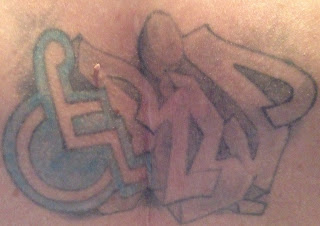 Cal, Lu, Esau, Shiloh, Cran, Joey, and I were hanging in the front of the shop while the guys got cancer, and we were talking about tats and the convention coming up in San Angelo, which was going to be Joey’s and my first.  At one point, it was thought that I need to get ‘crip’ inked across my belly gangland-style.  I said, “Hell no, because my luck, I’ll go outside without a shirt, and wind up getting shot.”  I said, but I liked the idea, so why not make the wheelchair insignia the ‘C’, and have the rest go off from there.  So, we planned to do it on my back at the show, which Lu did in a 2.5 hour sitting with me leaning forward the whole time.  Like Cal would say, “Spicy!”

The thing about being a crip in an electric wheelchair with tilt/recline, you come with your own tattoo bed.  All you and the artist has to do is figure a position you can both agree on to do the sitting.  I mean, either way it’s gonna hurt, but that’s the named of the tattoo game, right?  We all know what we’re getting ourselves into here…almost 50 tattoos between us later...including my first Heaven's Gates by my girl, Dre, who I'm honored to be my first female artist. 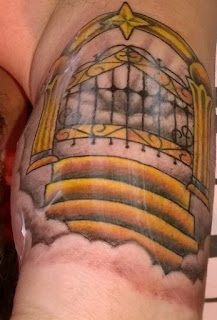