When You Wish Upon a Star... 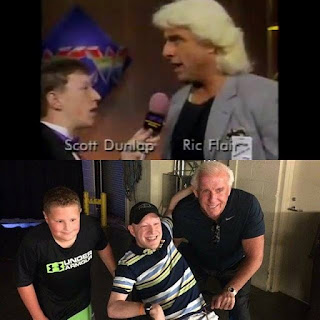 So, I’m gonna put my boy, Scott, on blast, because just makes things happen for him.  Don’t know how he does it, wish I had his luck.  In school, I used to rib him about having a money tree in his folks’ backyard, dude just exuded green.

Anyhoo, and I’m talking to the folks of crip kids in these next couple of posts, I believe it was ‘93ish when Scott was granted a Make-A-Wish.  I’d always heard of the foundation, but personally knew anybody, who’d had a wish granted.  In my ignorance, I always thought it was for people, who were checking out.  Unless I was badly missing something, Scott was far from checking out.  I’d known some CP kids, who’d checked out, but those were extreme cases, unfortunately.

Now, anybody, who’s known Scott, knows the dude lives wrestling.  He absolutely knows everything there is to know about the product: the history, they federations way past and present, the key players that’ve made the product what it is today.  So, when his wish was granted, it was no surprise what was gonna go down.

He was literally able to meet all the greats as it was making a resurgence from being a *cough cough* Yeah, I watch *mumbled* wrestling *cough cough* to something that was fun to watch with some legit talent.  Oh yeah, there were still the roided out ones, always have, always will…slipping the cracks of the wellness program, and there was the ladies division.

My boy got to to go to the WCW Fall Brawl ’93 PPV where he got to rub elbows with Mick Foley, Vader, and his all-time favorite, Ric “The Nature Boy” Flair.  Dude was in hog heaven.  He even got to interview the late Davey Boy Smith.

Then, a few years ago, who can forget how the whole city of San Fran came together to make one little boy’s wish through Make-A-Wish to be Batman for a day to save the city from the clutches of among others, The Penguin with the real Batman.  That event was made into a short on Netflix called Batkid
Parents look into it, pay attention to what they say, sign, whatever.  You’re already the best parent you can be.  Why not go for the “Best Parent Ever” award.  Like I’ve been told recently, the worse thing they can say is no.